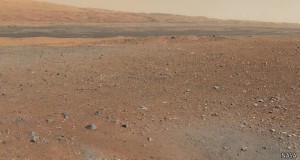 Currently, there is no known plant that would be able to survive the extreme conditions on Mars unprotected. The thin atmosphere (less than 1% as dense as Earth’s atmosphere) means that there is no barrier against the Sun’s radiation, and the absence of a global magnetic field means there is no protection for living organisms on the surface.

Although there is an abundance of carbon dioxide with it making up 95% of the atmosphere, the low oxygen levels and lack of water would prevent plants from growing. Temperature is another issue to consider, with the average temperature on Mars being between -81°C and -5°C, and dropping to around -140°C in the winter.

It has been found that the soil on Mars is sterile and salty, which means that it would be necessary to introduce the organic nutrients found in the soil on Earth, as well as flush out the excess salts. The soil could then possibly be used to grow plants, but only in a controlled greenhouse environment in order to protect it from the harsh Martian conditions.