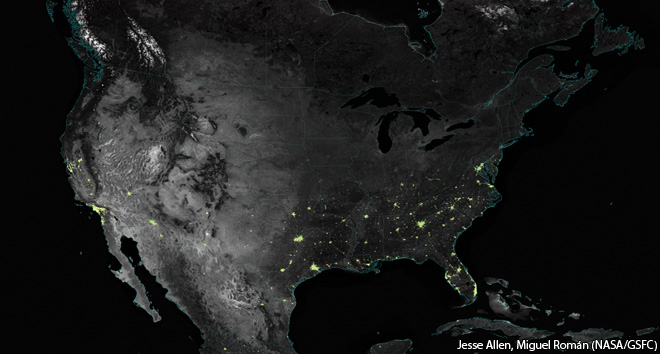 Even astronauts aboard the International Space Station will be able to get a taste of Christmas on Earth this year, as NASA scientists have identified how night time light intensities change during the holiday season.

According to data from the Suomi NPP satellite, night time lights around many major U.S. cities shine between 20 % and 50 % brighter during Christmas and New Year compared with light output during the rest of the year.

The maps above and below show the change in lighting intensity and location in the Southern United States (top) and Texas and Louisiana (below). The map compares the night time light signals from December 2012 and 2013 to the average light output for the rest of 2012 to 2014. Green shading marks areas where light usage increased in December; yellow marks areas with little change; and red marks areas where less light was used. 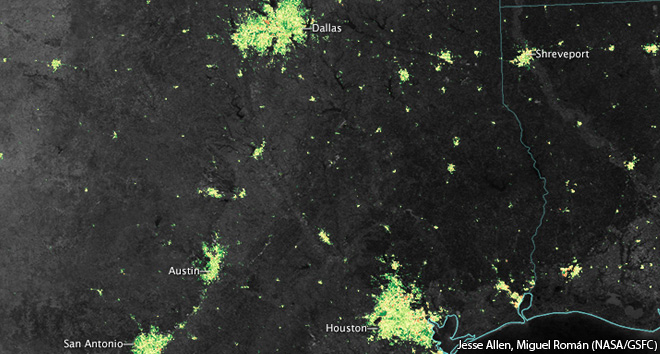 Because snow reflects so much light, the researchers could only analyse snow-free cities. They focused on the U.S. West Coast from San Francisco and Los Angeles, and cities south of a rough imaginary line from St. Louis to Washington, D.C.

How does a light bulb waste energy?

Suomi NPP, a joint NASA/National Oceanic and Atmospheric Administration (NOAA) mission, carries an instrument called the Visible Infrared Imaging Radiometer Suite (VIIRS) that detects light in a range of wavelengths from green to near-infrared as it flies over at roughly 1:30 a.m. and 1:30 p.m. each day. VIIRS has a low-light sensor, or “day-night band (DNB),” that can distinguish night lights tens to hundreds of times better than previous satellites. Scientists use the DNB to observe comparatively dim signals such as city lights, auroras, wildfires, and reflected moonlight.

In the United States, the lights started getting brighter on the day after Thanksgiving and continued through New Years Day, said Miguel Román, a scientist at NASA’s Goddard Space Flight Center and member of the Suomi NPP Land Discipline Team. Román and colleagues examined the light output from 70 U.S. cities in 2012 and 2013 as a first step toward determining patterns in urban energy use—a key factor in greenhouse gas emissions.

Where are all the stars?