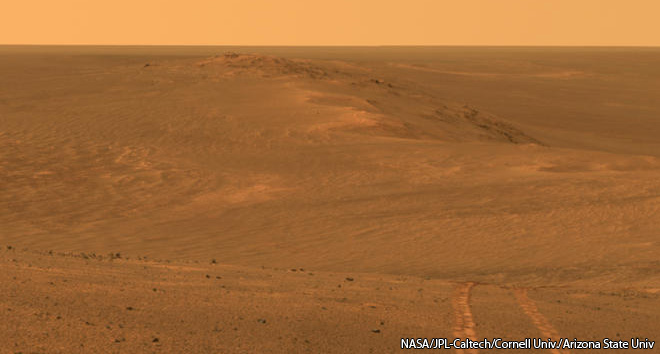 The atmosphere on Mars has a lot to do with the typical reddish colour we associate with the planet. We can even relate this redness of the Martian sky to the orangey tinge we see at dusk (on Earth). Let’s consider how the colour of the sky varies during the day here on Earth – this is something we are all familiar with. The sky is typically blue during the day but orange at sunset and sunrise. This variation in colour depends on how much the white light coming from the Sun is scattered by microscopic particles floating in the air.

White light is composed of essentially a blue component on one end and a red component on the other – think of a rainbow. During the day, the blue component is scattered more than the red and therefore the sky appears mostly blue. However, the closer the Sun is to the horizon – i.e. as the Sun sets or rises – the more air the light has to go through and the more particles it has to interact with. Thus the more pronounced the scattering is as a result, in which case almost all of the blue component is removed leaving mostly the red colour.

To come back to Mars, there are particles in the Martian atmosphere which cause the light from the Sun to scatter so much that the blue component is almost completely eliminated leaving a reddish hue to prevail. Just as on the Earth, though, the colour of the Martian sky varies with time and a number of other atmospheric conditions. But, generally speaking, you can hold the dusty atmosphere on Mars responsible for its red sky.