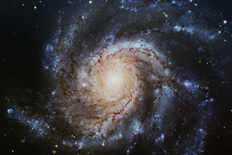 Firstly – and obviously – nobody knows. But you have actually asked two questions.

Initially the universe was filled with ‘primordial substance’ (protons, neutrons, and electrons mainly but not assembled into atoms) and was opaque to light and radio waves. About 300,000 years after the big bang, the universe condensed from separate protons and neutrons and electrons into atoms and at this point the universe became transparent.

When we look with our telescopes at objects which are very distant, we are looking back in time but we can never look back beyond this point, (because the universe was opaque at earlier times). This is the limit of the observable universe. Even though there have only been around 12 billion years since the big bang, the observable universe is around 80 billion light years across because not only has the matter in the universe expanded, so has the space that that matter occupies. And if you don’t understand that, I don’t blame you. Neither do I.

So there is then the matter of the parts of the universe that we can’t observe – those parts that were distant from us at the point when the universe became transparent.
And then there is the question of what was the context for the big bang. We are nearly, but not quite completely, clueless on most of these questions.