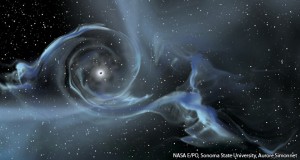 A black hole is a region in space from which nothing can escape, formed when stars run out of fuel for nuclear fusion in its core and “die out”. The lack of material to fuse causes a star to explode and collapse in on itself under the force of gravity, as it is no longer able to create energy and radiation that push outwards.

Even though it pulls in any material that happens to come within a certain range, called its event horizon, a black hole is empty. Its mass, and all mass that subsequently falls into it, is crushed and confined to an infinitely small point at its centre, called the singularity. What surrounds it is the inner event horizon, which is a vast sphere of darkness.

A black hole possesses so much gravity that not even light can escape its pull, making it impossible to see what is actually inside. Astronomers identify the presence of a black hole by detecting the radiation emitted when matter is accelerated and heated before being pulled in.