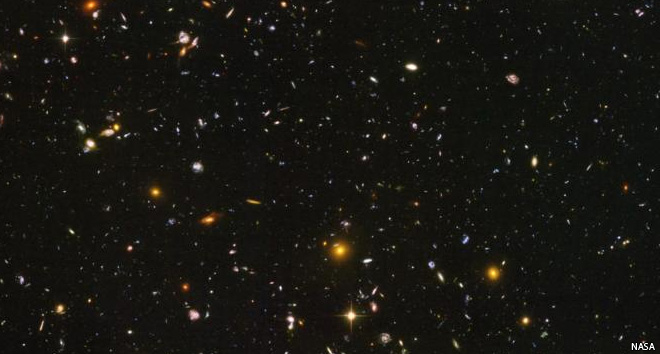 Space that we can see is mainly very very empty.

If you ignore the galaxies and stars, then the rest of space is mainly a vacuum, so there’s no particles at all.  The particles that are there are mainly hydrogen and helium, which form a plasma called the Intergalactic Medium.  A plasma is where these particles have energy and are ionised, so behave very differently to when they are just a gas.

84% of everything in the Universe is thought to be dark matter!

In addition, scientists believe that there is dark matter.  Dark matter is so called because it has never been seen, but in order for the laws of gravity in the Universe to work properly, it is needed to be there, in fact, 84% of everything in the Universe is thought to be dark matter!  A big future area of research will be to try to understand more about dark matter and work out if it can be detected.

When you look at the pretty pictures taken with telescopes of areas of galaxies, or where stars are forming you will often see the pretty colours from swirls of dust and gases.  This is where there is a higher amount of these compared to the rest of Space, but even between all the stars and planets in a galaxy, most of it is still the vacuum of space.