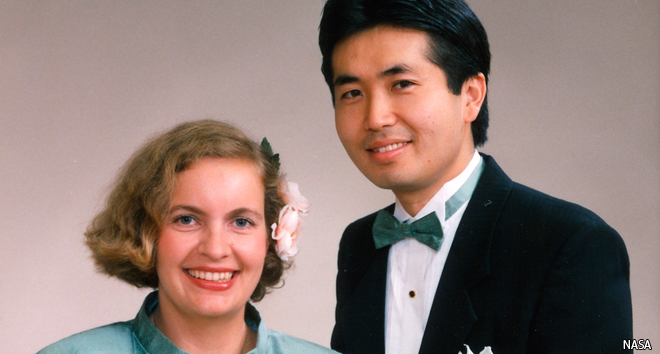 As the wife of an astronaut, it can be a very lonely life with long periods of separation.

But as Stefanie Wakata explains – whose husband of 18 years, Koichi, is currently up in space – you can lead a happy and enjoyable life if you are patient, flexible and you are prepared to make compromises.

And whilst she freely admits that she finds watching her husband blast off into space terrifying, she stresses she would never ever make him give up his incredible career.

I have learned to be incredibly flexible and patient as Koichi’s wife,” she confides. “You can’t ever write anything in stone and you have to be ready to change plans at any moment. You have to be able to go with the flow and it’s important to lead your own life and have other passions rather than sitting at home worrying about your spouse.”

Stefanie, or Steffi as she is affectionately referred to by family and friends, is CEO of her own company, Exploring Concepts, which helps international employees moving to a new country adapt to the different cultures. Her husband’s latest trip to the International Space Station is his longest yet and he will be away for six months. It’s the fourth time he has blasted off from Earth after he was accepted by the Japanese Space Agency shortly after graduating with an Aeronautical Engineering degree. At the time, Steffi had returned to Germany to finish her own degree and she uprooted her own life to move to Houston in 1993 to join Koichi. They married in 1996 after his first mission. 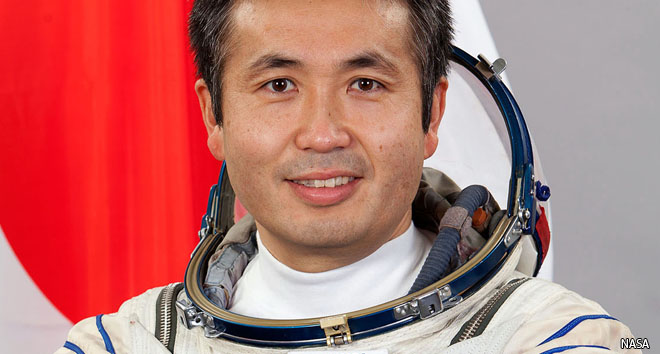 Recalls Steffi: “When we first met, there was never any mention of this particular career aspiration. He was already working for the Japan airlines when he spotted the ad to become an astronaut. But the whole time he went through the career process, we didn’t think he would get it. And so when he did get the job, my first reaction was to go ‘Congratulations, that is huge’. I then realised it was going to have a major impact on our lives. All of a sudden, he told me we would have to move to Houston.”

As she reflects on the dangers of her husband’s job, Steffi goes on:

He has been on four missions now and with each flight, it does get a bit more seasoned.

“However the moment the rocket blasts off in a fire ball is when you do really realise the grandness of the entire undertaking. It is then that you are the most worried. There have been accidents in the past and that is when I am most scared. You hold your breath, you grit your teeth and your hands shake. But you know deep down, that is what is going to get them into space.

“Whilst you have to rely on your own instinct when he is gone, there are moments where you really feel the void. For me, it can come at any time, say when you are watching a movie, and wish he were there. You pause and you realise he really isn’t.

“Holidays and Christmas are very intimate moments you share as a family and you really feel the void then too.

“But I do keep busy because my own job is very busy.” 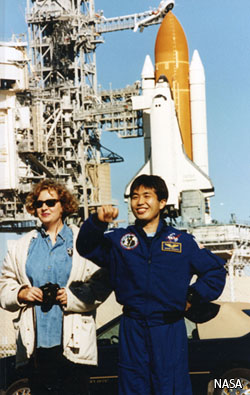 The couple have a 15-year-old son, Akio. He has, she confides, found it tough being separated from his talented father. She says: “ When he was little, it was very painful not to have dad around. He is 15 now and like every teenager, he is trying to forge a life without his parents around as much as possible! I think he misses him very much but it is not as painful anymore. Does he want to follow in his footsteps? No! He has very different aspirations. He is really interested in computer science.”

And whilst the loneliness is, understandably, very difficult for Steffi to come to terms with, she also explains that when Koichi returns back from space, it is a testing time for the family.

There is always a phase where everyone gets used to being together again,” adds Steffi. “Everyone is different. We all have different likes and dislikes and dad likes certain foods, which we don’t particularly like and we haven’t eaten in six months! We have to shift back and go and buy the food in the store. There is also the whole communication deal. It changes back from two to three and it does take time to adjust.

“But at the same time, I do expect him to take part in certain activities when he gets home like organising and cleaning up. I expect that from everyone when they are down here!”

Proud their marriage has stood the test of time, Steffi has never once asked him to sacrifice his career for the family. “I always tell him that if there is a personal development to make, then he should do it,” she says. “We have got lots of ambitions but I don’t consider us as leading a starry life. Koichi does go on a lot of official visits to Japan and we do socialise with our friends. But I don’t have the impression we are, in any way, close to high society! “

As for how she thinks Koichi would cope if he did ever give up his glittering space career and she thinks it will be his turn to be flexible. She explains: “I think he will miss flying in space and that whole experience, but at some point there will be a new generation coming along, and they will want to fly. He will have to put his focus on something else…”

Live from Space season airs on Channel 4 in March 2014