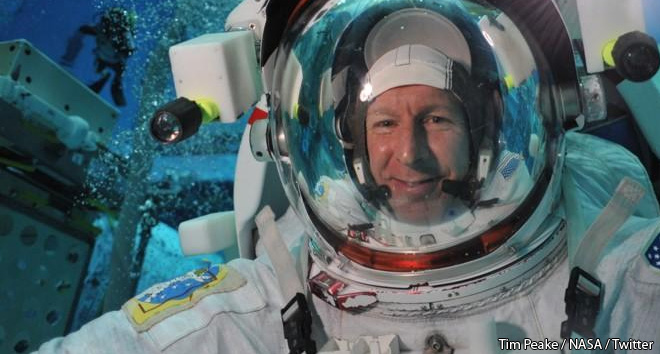 Tim Peake is a UK astronaut who is due to fly on-board a Soyuz rocket from Baikonur in Kazakhstan to the International Space Station in late 2015.

He is the first Briton to have ever been accepted into the European Astronaut Corps and his mission will make him the first UK national to live and work in space, and to fly the Union flag on a British-government funded programme.

All previous British-born astronauts have gone into orbit either through the US space agency NASA as American citizens, or on private ventures organised with the assistance of the Russian space agency.

Peake, who was born in Chichester on 7 April 1972, graduated from the Royal Military Academy Sandhurst in 1992. After becoming an Army Air Corps officer, he served as a reconnaissance pilot and flight commander in Europe, Africa and North America between 1994 and 1998.

In 1999, Peake was selected for an exchange posting with the US Army, which saw him fly Apache helicopters in Texas between 1999-2002. This led to him becoming an Apache helicopter instructor in the UK, and was instrumental in introducing Apache’s into service with the British Army.

From 2006 until his retirement from the Armed Forces in 2009, Peake served as the senior Apache test pilot in addition to being a test pilot for Special Forces aircraft projects.

He has logged over 3000 hours flying time on more than 30 types of helicopter and fixed wing aircraft, including the Hawk, Dakota, Harvard and Mi-17.

Have you ever wondered what it’s like to be an astronaut? Former NASA astronaut Jerry Carr talks about his experiences.