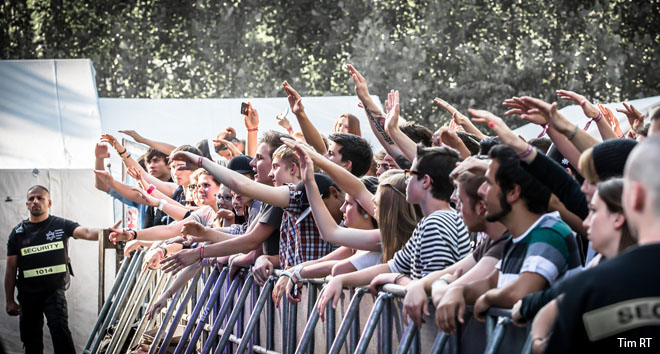 Stampedes and fatalities in over-crowded areas are unfortunately still all too common, but can technology play a role in putting an end to these disasters?

At the Hajj pilgrimage, the world’s largest Islamic gathering, authorities now use live crowd analytics software which can spot problems in the crowd and also claims to be able to predict where overcrowding is likely to occur.

Live data feeds come into a large operations room where they are analysed by military personnel, the police and other crowd managers. The software provides accurate and real-time data on crowd numbers, densities, distributions and flows.

[the software] spots patterns of crowd behaviour that indicate potential danger such as high densities, pressure, turbulence, stop-and-go waves and other anomalies,” says Fiona Strens, co-founder of CrowdVision, the firm behind the software.

The UN expects that by 2050 the world’s population will top nine billion, with nearly 70% of them living in towns and cities. With urban areas around the world getting more overcrowded, technology to monitor crowds are becoming increasingly important, for example at popular gatherings such as major music and sporting events.

Understanding how people move through a city will help develop smart transport systems and keep people safe in times of danger whether natural or manmade,” says Ovum analyst Joe Dignan.

The software developed by CrowdVision suggests that music festival organisers may be making fundamental errors by posting stewards at the front of crowds.

The maps suggested the problems were actually in the middle of the crowd…If the stewards had tablets with real-time information on them, they could see exactly where they needed to be,” said Ms Strens.

However this solution may not be applicable to Madhya Pradesh, the Indian state where a stampede in October 2013 occurred at a Hindu festival. The Indian media reported that better crowd management could have prevented the tragedy, but it’s likely the stampede was sparked by panic, a result of rumours of a bridge that people were crossing was about to collapse. The bridge itself had been built after a stampede at the same temple seven years ago, when attendees had been crushed crossing the river.

This illustrates that regardless of how carefully planned an event is, there is often no accounting for human behaviour. Technology may help but it is only ever going to be part of the solution, according to Prof Still.

The best way to avoid this in the future is education on crowd safety.