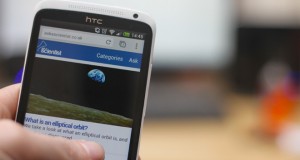 There are two types of touch screen technologies used in the majority of consumer electronics, so it really depends on the device you’re using.

Smart phones such as the iPhone and Blackberry Storm use capacitive touch screens. These have a glass screen coated with a transparent conductor layer that stores electrical charge. As the human body is also an electrical conductor, the touch of a user’s finger to the screen distorts the electrical field. The device uses this to calculate where on the screen the touch took place and then relays the information to the driver software.

Resistive touch screens are used on some HTC and Samsung phones, as well as electronic signature devices used by delivery companies. These have a glass panel covered with a conductive and resistive layer, held apart by spacers, with an electrical current running through them when the screen is operational. When a user touches the screen, either with a finger or stylus, the two layers make contact. The coordinates at the point of contact can be calculated by the computer by noting the change in the electrical field resulting from the touch event, and then translated by a device driver into something that the operating system can understand. This follows in much the same way as a computer mouse driver translates a mouse’s movements.

A key advantage that the resistive system has is that it is able to register a touch event as long as two layers make contact, whereas a capacitive system only recognises a conductive input – usually the user’s finger. This means that devices such as the iPhone that have capacitive touch screens generally don’t work with electrically insulating materials, such as gloves.