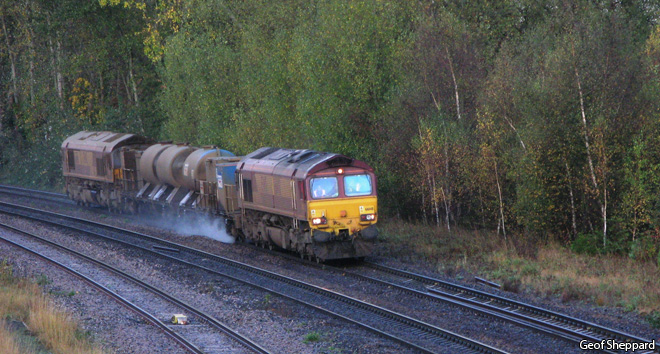 As Autumn arrives, so do delays and cancellations on the railways caused be ‘leaves on the line’, often seen as a joke or just another excuse by train companies. However it is a very serious issue that affects trains in many countries around the the world, such as heavily forested areas of America, Canada, the UK and Europe.

A mature tree can have between 10,000 and 50,000 leaves and each autumn thousands of tonnes of leaves fall onto railway lines across the UK.

When leaves fall on, or near, the rail tracks, they are swept up under the wheels of passing trains and compressed. Over time more leaves fall and are crushed by more wheels of passing trains.  This high pressure crushing of the leaves turns them from things that we would recognise as leaves into the equivalent of a “Teflon” coating on the rails.  “Teflon” is more commonly found in non stick frying pans and whilst it is great for cooking, having non stick rails is a major risk as the trains can just slide along the rails when they try to stop. This is especially the case when combined with certain weather conditions such as light rain or mist as wet leaves being compressed are more likely to cause the coating to form.

This coating acts in a similar manner to black ice on roads and reduces the adhesion between the wheel and rail.

Leaves on the line have been blamed for a number of incidents on the UK rail network in recent years:

Network Rail, the owner and operator of most of the rail infrastructure in Great Britain, tries to keep delays to a minimum by keeping trees and vegetation along the track side cut back, as well as deploying “leaf busters”, as seen in the photo at the top right, which spray powerful jets of water on the lines to wash away leaves which maybe on the track.

Some rail operators also publish ‘leaf timetables’ in the Autumn, which allow their trains to take longer to slow down at stations, helping them remain on time.